The Labour Standards Development Authority in Sharjah (LSDA) has announced the launch of the fourth edition of the Sharjah Labour Sports Tournament on February 5, and will last until April 2, 2021. Matches of this first of its kind tournament, will be held every Friday at the playgrounds of Sharjah Sports Council in Sharjah National Park, opposite Sharjah International Airport, from 8 to 11 am and from 1 to 5 pm. LSDA holds the tournament in cooperation with the Sharjah Sports Council and Teach Target Sports Company.

His Excellency Salem Yousef Al Qaseer, Chairman of Labor Standards Development Authority in Sharjah, said, the fourth edition of the tournament is expected to attached high response and participation from workers and staff of the public and private sector. He said, “The concept of the tournament is based on holding several sports competitions among labour teams in five sports, where the number of players are expected to be over 1200 distributed on teams as follows: football teams 20, basketball teams 12, cricket teams 25, volleyball teams 12, and hockey teams 12.” He stressed that the tournament will apply all the precautionary measures decided by the country in sports activities.

The teams will be divided into groups in the league system of one round, with the first of each group ascending to the final rounds. As in the previous editions, which were greatly successful, the fourth edition will also witness a grand closing ceremony, to crown the winning teams and honor them with cash and kind prizes amounting to AED 250,000.

The LSDA Chairman said the tournament is part of the authority's strategic plan, set forth by His Highness Sheikh Dr. Sultan bin Mohammed Al Qasimi, Supreme Council Member and Ruler of Sharjah, to establish sport as a lifestyle and way of entertainment for workers. He expressed satisfaction over the success of the tournament as seen in the previous editions and the great response from participants and fans. “This is the first of its kind tournament which aims to promote team work as the base of sport games and a healthy relationship between workers and employers,” he said.

His Excellency Al Qaseer said, “Sports brings together individuals and communities irrespective of their nationality and ethnicity. It plays an important role in developing the spirit of cooperation and competition among all, and contributes to building bridges of acquaintance between all. All these values are integral parts of the LSDA’s strategy that has been developed under the direct supervision of His Excellency Sheikh Sultan bin Mohammed bin Sultan Al Qasimi, Crown Prince and Deputy Ruler of Sharjah and Chairman of the Executive Council. He also thanked the sponsors from the public and private sectors who contributed to the success of the previous editions.

On his part, Tariq Salem Al Khanbashi, founder and director of Reach Target Sports Services, said: We are pleased at Reach Target to be partners in organizing the fourth edition of the Sharjah Labour Sports Tournament, and ready to exert all efforts needed to contribute to the success of this edition as well. He pointed out that Reach Target has completed preparations for the tournament, and emphasize the importance of its cooperation with the Labour Standards Development Authority in Sharjah to present a distinguished tournament that contributes to the advancement of labour sports in Sharjah as a healthy and lifestyle and for teamwork and more cooperation among workers and between them and employers. Al Khanbashi stressed that the success of the previous editions of the tournament will motivate the success of the fourth edition. He also pointed to the importance of the tournament in promoting practicing sports in various segments of society, including the workers. 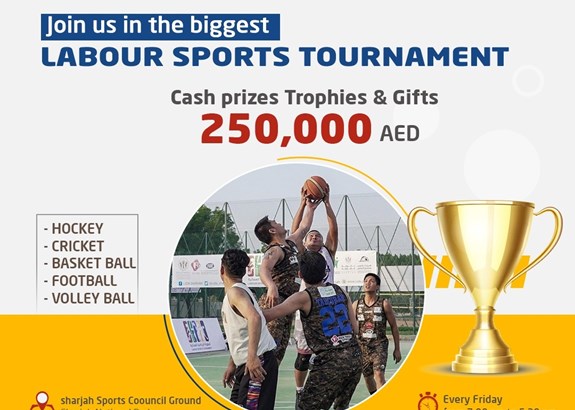